During his life, he held various military and political offices, including Postmaster General, First Lord of the Admiralty, and Secretary of State for the Northern Department, but is perhaps best known for the claim that he was the eponymous inventor of the sandwich.

John Montagu was born in 1718, the son of Edward Montagu, Viscount Hinchingbrooke.

His father died when John was four, leaving him as his heir. His mother soon remarried and he had little further contact with her.

He succeeded his grandfather as Earl of Sandwich in 1729. He was educated at Eton and at Trinity College, Cambridge, and spent some time travelling, initially going on the Grand Tour round Continental Europe before visiting the more unusual destinations of Greece, Turkey, and Egypt which were then part of the Ottoman Empire.

This led him to later found a number of Orientalist societies.

On his return to England in 1739, he took his seat in the House of Lords as a follower of the Duke of Bedford, one of the wealthiest and most powerful politicians of the era.

He became a Patriot Whig and one of the sharpest critics of the Walpole government, attacking the government’s strategy in the War of the Austrian Succession.

Like many Patriot Whigs, Lord Sandwich was opposed to Britain’s support of Hanover and strongly opposed the deployment of British troops on the European Continent to protect it, instead arguing that Britain should make greater use of its naval power.

He gained attention for his speeches in parliament. His oratory earned him a reputation for clearly setting out his argument even if he lacked natural eloquence.

In 1744, the Duke of Bedford was invited to join the government, now headed by Henry Pelham, taking the post of First Lord of the Admiralty.

Sandwich joined him as one of the Commissioners of the Admiralty, in effect serving as deputy under Bedford.

The experienced Admiral Lord Anson also joined the Admiralty board and was an influential figure.

Bedford spent much of his time at his country estate, and much of the day-to-day running of the Admiralty fell to Sandwich and Anson.

Anson had control of the training and discipline of the navy, while Sandwich focused on the administration.

Following a proposal by Admiral Edward Vernon, the concept of a Western Squadron was pioneered, which proved very successful.

This marked a radical shift in British naval strategy, and led to British success at the Battles of Cape Finisterre.

The following year, Sandwich took a commission as a Colonel in the Army as part of the response to the Jacobite Rebellion and the prospect of a French invasion.

In order to boost the relatively small British army, a number of units were raised by prominent figures, and Sandwich served in the regiment formed by Bedford.

While serving in the Midlands, he fell seriously ill with fever and nearly died.

After his recovery, he returned to his duties at the admiralty. He remained an army officer for the rest of his life, remaining on the half-pay list and eventually rising to the rank of General, even though he took no further active part in the army.

In 1746 he was sent as a plenipotentiary to the congress at Breda, and he continued to take part in the negotiations for peace until the Treaty of Aix-la-Chapelle was concluded in 1748.

Sandwich was also made British Ambassador to the Dutch Republic during the talks.

Using the resources of the British secret service, Sandwich was able to outmanoeuvre his French counterpart by intercepting the latter’s secret correspondence.

His service at Breda drew him to the attention of the influential Duke of Newcastle, who lobbied for him to be given high office when he returned home.

It is possible that during his time at Breda, he played a role in the 1747 Dutch Revolution which brought The Prince of Orange wider powers, something supported by Britain as they hoped the Prince would improve the Dutch Republic’s military performance in the ongoing war in the Low Countries.

However, there is no firm evidence of this.

First Lord of the Admiralty (first and second spells).

In February 1748 he became First Lord of the Admiralty, retaining this post until June 1751.

By 1751 Newcastle, who had previously admired Sandwich for his forthright and hardline views, had increasingly begun to distrust him and his relationship with The Duke of Bedford whom Newcastle regarded as a rival.

Newcastle engineered the dismissal of both of them, by sacking Sandwich.

Bedford resigned in protest, as Newcastle had calculated, allowing him to replace them with men he considered more loyal personally to him. 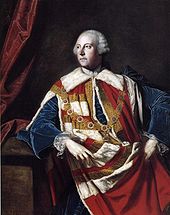 The Duke of Bedford was a long-standing patron of Sandwich, and his support helped him further his career.

For the next few years Sandwich spent time at his country estate, largely avoiding politics, though he kept in close contact with both Bedford and Anson and Britain’s participation in the Seven Years War.

Partly thanks to naval reforms pioneered by Anson and Sandwich the Royal Navy enjoyed a series of successes and was able to blockade much of the French fleet in port.

In 1763 he returned to the Admiralty in the government of John Stuart, 3rd Earl of Bute, and encouraged a major rebuilding programme for the Royal Navy.

Bute was a Tory who wished to bring the war to an end, which he did with the Treaty of Paris.

It was during this time that Sandwich first met Martha Ray who became his long-standing mistress.

He was soon dismissed from the office, but was offered the influential position of Ambassador to Madrid.

In August 1763 Sandwich became Secretary of State for the Northern Department, in the government of George Grenville who had replaced Bute.

While filling this office he took a leading part in the successful prosecution of the radical M.P.

John Wilkes for obscene libel. Although he had been allegedly associated with Wilkes in the notorious Hellfire Club (also known as the Monks of Medmenham), recent scholarship has suggested that the two had a more distant but cordial relationship than the friendship which was popularly portrayed at the time.

John Gay’s The Beggar’s Opera was played in Covent Garden shortly thereafter, and the similarity of Sandwich’s conduct to that of Jemmy Twitcher, betrayer of Macheath in that play, permanently attached to him that appellation.

Wilkes was eventually expelled from the House of Commons.

He held the post of Northern Secretary until July 1765.

His departure from the post coincided with the end of George Grenville’s term as Prime Minister.

He hoped to return to office swiftly, provided a united opposition could be formed. 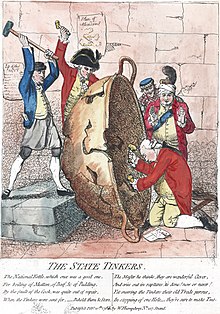 In The State Tinkers (1780), James Gillray caricatured Sandwich (on left) and his political allies in the North government as incompetent tinkers.

Sandwich was Postmaster General from 1768 to 1771 and briefly Secretary of State again from December 1770 to January 1771.

Sandwich served again as First Lord of the Admiralty in Lord North’s administration from 1771 to 1782.

He replaced the distinguished Admiral Sir Edward Hawke in the post.

His appointment to the post followed the Falklands Crisis which had nearly seen Britain go to war with Spain over the Falkland Islands in the South Atlantic Ocean after the Capture of Port Egmont by Spanish forces.

War had only been averted when Louis XVI of France refused to back the Spanish over the dispute.

Both France and Spain resented what they considered British hegemony following the Seven Years’ War, and desired to overturn the imbalance of power; war was widely expected to break out between the nations in the near future.

Sandwich’s administration of the Navy in the lead up to and during the American War of Independence was traditionally portrayed as being incompetent, with insufficient ships being ready for the outbreak of war with France in 1778.

When Britain and France went to war, Sandwich advocated a strategy of concentrating the British fleet in European waters to deter invasion in opposition to his colleague, Lord Germain, who pushed for more ships to be sent to North America.

The cabinet largely followed Sandwich’s policy, retaining footholds on the American coast which could be used as naval bases, while retaining the bulk of the fleet at home.

Sandwich’s problems increased when Spain entered the war on France’s side in 1779 giving the Bourbon fleets a numerical advantage over the Royal Navy.

During 1779 a combined Franco-Spanish fleet was able to sail into the English Channel to threaten the coast of Cornwall in the initial stage of a Franco-Spanish invasion of Britain.

Sandwich was criticised for the failure of the smaller British Channel Fleet to prevent this, although the invasion never materialised.

After 1778, the primary objective in the war was maintaining control over the sugar-rich West Indian archipelago.